In our commitment to provide you with products that will help with your skin condition, we present to you 5 body washes designed to fight fungal infections. After hours of in-depth research and analysis, we finally picked what we feel is the best antifungal body wash based on ability to stop the spread of fungus, gentleness on the skin and value for money.

The FungaSoap Cleansing Wash by PediFix is a product developed by a doctor. Its main component is Tea Tree Oil, an ingredient used for centuries due to its antiseptic properties.

Choose the Antifungal Liquid Soap with Tea Tree Oil by Calily Life for an organic and natural product. It comes in a very huge amber bottle so you definitely get your money’s worth.

Defense Soap’s Body Wash is another organic product on this list. Its unique combination of Eucalyptus and Tea Tree Oils make this highly effective against fungus, viruses, and bacteria.

The Anti-Fungal Shampoo by Healthy Hair Plus doubles as a body wash. It boasts of its Emu Oil content, an ingredient known to be both antibacterial and anti-inflammatory.

Here are the best antifungal body wash you shouldn't miss in your next shower.

This, for us, is the best antifungal body wash because it is infused with Tea Tree Oil. This ingredient has been used for centuries for its antiseptic and disinfectant properties.

This product deodorizes and cleanses the skin to eliminate bacteria and fungus that have built up on the skin’s surface. It also helps prevent them from coming back, which is a huge plus.

What makes this cleansing wash unique is that it is so gentle, it can also be used on the face. With regular use, aside from keeping the fungus away, it helps heal irritated and dry skin.

And since it comes in a concentrated formula, a little of this product will really go a long way. It also produces a good amount of lather, rinses off easily and does not leave any residue behind.

This product is highly recommended by a lot of doctors for treating nail fungus. One thing, though, that we didn’t like is its smell, but considering its effectiveness, we think that’s workable. 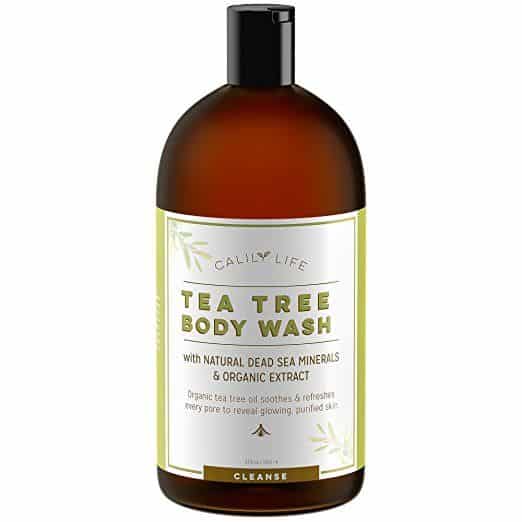 It comes in a concentrated formula that is purely organic and natural. This product is efficient at removing dirt throughout the body, but is gentle enough to be used on the delicate face area.

This body wash only uses quality ingredients to effectively combat bacteria and fungus, as well as the other skin conditions caused by them. It’s great at eliminating odors for a refreshing feel.

Designed for those who lead an active lifestyle, this soap destroys unwanted bacteria that may be introduced by exercise. This makes it perfect for athletes and their routines after working out.

But this soap is not restricted to being a body wash alone. It can be used as a foot soak, or can be applied directly on affected areas to increase its effectiveness.

Aside from its healing properties, this soap is rich in essential oils to moisturize cracked and dry skin. Dealing with fungal infection is uncomfortable and this wash helps alleviate the pain.

What we love about this product is that it is vegan and 100% organic. It has Eucalyptus and Tea Tree Oils as its main components, which are known to be antibacterial, antiviral, and antifungal.

This product comes with a rich lather which is important for a more effective penetration into the skin’s pores. This is key for its ingredients to be delivered and absorbed quickly by the skin.

But aside from its healing properties, this soap comes with moisturizing abilities as well. Infused with olive, jojoba, and coconut oils, it rejuvenates skin to bring back to its softest condition ever.

Made for active people, this wash is recommended for use after working out. Widely used in the world of contact sports, this soap is known for its longevity, consistency, and superior quality.

Great for oily skin, it helps keep oil at bay and repairs the skin’s natural barrier. Ideal for those with sensitive skin, it has no artificial fragrances and comes with a clean, eucalyptus scent.

#4 Anti-Fungal Shampoo by Healthy Hair Plus

First and foremost, while this product is labeled as a shampoo, the company stressed out it can be used as a body wash, too.

Other products may use Tea Tree Oil, but this shampoo has Emu Oil as its key ingredient. With botanical extracts, it penetrates the scalp’s layers to kill bacteria and heal it at the same time.

Emu oil is known for its antibacterial and anti-inflammatory properties and has been used to heal burns and wounds. Its antiseptic properties relieve scalp from soreness and redness.

This shampoo claims to be the strongest one out there and is the perfect choice for a scalp treatment. It addresses scalp bumps, fungal scalp infections, and even psoriasis of the scalp.

Infused with vitamins and minerals, this product not only takes care of scalp problems but restores its health as well. Safe for the whole family, this product is gentle enough for kids, too.

Apart from working well against fungi, this product is also good for oily hair. It cleanses without drying your hair out and transforms dull hair to hair full of life.

We really love this product since it contains 100% Tea Tree Oil. This wash is also infused with natural and organic botanicals filled skin conditioning properties to moisturize dry, flaky skin.

This antifungal body wash boasts of its 5% concentration level of Tea Tree Oil. The company claims to be the maximum strength possible, so there’s no way this product is not going to work.

This product is free of chemicals so you have the peace of mind that nothing harsh will enter your body. Aside from washing away fungus and bacteria, it also stops them from coming back.

The body wash produces a good amount of lather, but unlike other body washes, this product comes off clear. It also has a clean, pleasant smell that won’t irritate those with sensitive noses.

Our last point is that it comes in a pump bottle. Not only does it make the product easier to dispense, it also prevents unnecessary spillage and wastage.

Reviews and Comparisons of The Best Antifungal Body Wash

What are the Types of Skin Conditions Caused by Fungus?

Fungal skin infections are caused by a lot of factors. Though we often relate fungal attacks to poor hygiene, these can also be caused by obesity or a prolonged use of antibiotics.​

Most skin infections are to be blamed on fungi. And while some are naturally produced by our bodies (called yeasts,) some grow outside the body (dermatophytes) and cause infection.

The most common type of yeast infection is called candidiasis which affects the mouth, nails, and skin, as well as the respiratory system and the genitals. Below are its most common forms:

Yeast onychomycosis. This type affects the nails, and is often characterized by inflammation, redness, or pain.​

Some may even feel warmth underneath or around the nail or nail bed, and is oftentimes accompanied by a pus discharge.

Tinea versicolor. Commonly affecting teenagers and young adults, it is characterized by red, tan, or white rough patches around the torso, the arms, or the neck.​

Dermatophyte infections, on the other hand, are found in protein-rich areas such as the hair, nails, or skin. Some common forms include the following:

Athlete’s foot. A chronic type of infection, symptoms include scaly skin between the toes, along with some soreness and itching—small blisters may be present as well.​

Jock itch. Also known as gym itch and often seen in men, this is usually caused by sharing clothing infected with athlete’s foot.​

What Can be Done to Prevent Fungal Skin Infections?​

The observance of proper hygiene is the most effective way of preventing fungal infections. You might also want to clean up your diet, because obese people are more likely at risk.​

Fungal skin infections can affect anyone, no matter how young or old you are. Though they can easily be prevented, we have the perfect solution for you in case you’re already infected.

Or if you’re just looking for a better way of preventing it.

We chose the FungaSoap Cleansing Wash by PediFix as the best antifungal body wash. With Tea Tree Oil, it washes bacteria and fungus present on the skin and prevents them from recurring.

The best part is this body wash is very affordable. So for those of you searching for something effective that isn’t heavy on the budget, this is probably what you’re looking for.

A board-certified dermatologist who practices both medical and cosmetic dermatology

We value scientific accuracy above all else. Our articles are crafted by skincare experts, with regular input from dermatologists.